Spock was first officer of the ISS Enterprise in 2267.

Like his counterpart in the mirror universe, Spock was a logical being who was loyal to his captain, James T. Kirk, and chose to warn him when he was ordered by the Terran Empire to kill him and take command if he did not launch an attack against the Halkans in retribution for their refusal to negotiate with the Empire.

Based on his captain's apparently erratic behavior, Spock correctly deduced that Kirk had actually been accidentally replaced by his counterpart from the mirror universe, and devised a means of returning Kirk, Scott, McCoy, and Uhura to their original ship.

Before Kirk left, believing that Spock would one day become captain of the Enterprise, he planted a seed of doubt about the inevitability of the Empire, asking Spock if violence was the only logical answer. Spock promised to consider Kirk's words. (TOS: "Mirror, Mirror")

As Kirk predicted, Spock later on became the captain of the Enterprise. Spock used the ship as a power base to accumulate influence, and eventually rose to become leader of the Terran Empire. He instituted major reforms, turning the Empire into a more peaceful and less aggressive power. Spock's reforms left the Empire too weak to fight the Klingon-Cardassian Alliance, who conquered the entire Terran Empire, enslaving the Terrans themselves as well as the Vulcans. (DS9: "Crossover")

Spock was played by Leonard Nimoy, who also portrayed the mirror universe Spock. Both characters were identical, except for a goatee; as a result, many evil twins in satirical works have goatees.

In 1998, Nimoy said he would have liked to play the mirror Spock in Star Trek: Deep Space Nine. This unfortunately never came to fruition.

The representation of Spock in "Mirror, Mirror" was the inspiration behind the name for the progressive-metal group Spock's Beard. 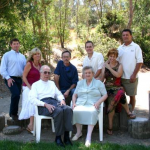 Categories
Other Languages:
Community content is available under CC-BY-NC unless otherwise noted.